If you’re looking for love in America in 2016, chances are, you’re a bit overwhelmed.

Are your odds of meeting someone the best if you hit the nightclubs, swipe and tap on dating apps, spend your time at the gym, or take a dance lesson? Maybe you’re likelier to meet your better half in Brooklyn or get swept off your feet by a single someone in Houston?

“Putting yourself out there” is a tough task, which is why we analyzed over 150 million active Facebook users in the U.S., using the site’s audience insights tool to find out where most single men and women live and go out and what they enjoy doing. So next time you’re ready to get out there and meet someone, you’ll know just where to look.

Here’s what we learned. 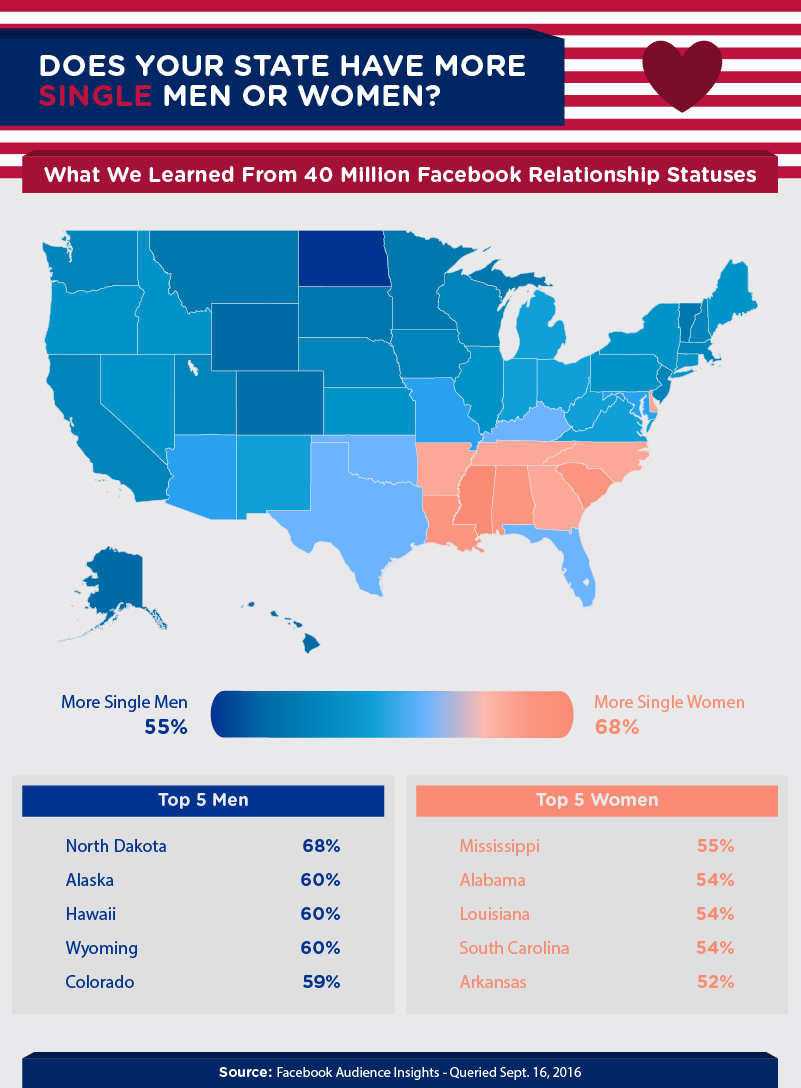 If you’re looking to increase your odds of meeting someone, consider moving somewhere with a higher-than-average percentage of your preferred gender. According to Facebook, North Dakota is home to 18 percent more single men than women. while Hawaii, Alaska and Wyoming offer up 10 percent more testosterone.

Of course, statewide data only help so much if you’re serious about making a move or planning your next (hopefully) romantic vacation. If you’re looking for cities where women greatly outnumber men, New York City, Philadelphia, and D.C. will do. For cities with more men, head west: San Diego, Seattle, and San Francisco have you covered. 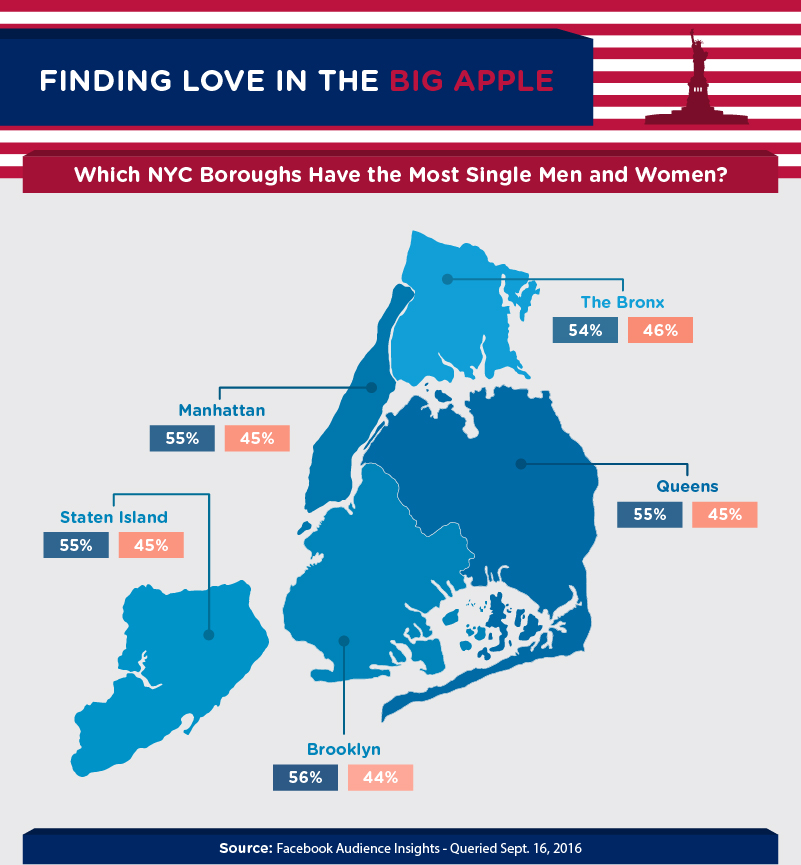 New York City consistently ranks as a top city for singles. And with the glamor, constant entertainment, epically good food, and the sparkling lights of a city that never sleeps, it’s easy to see why.

But where are the singles in New York? Which boroughs boast the most unattached women or available men? According to our Facebook data, when it comes to meeting single men, your chances are good in every borough. Brooklyn taking a slight edge over the rest, with 56 percent of its male residents listing themselves as single. Your chances of meeting single women are about equal across the board as well.

Where the Singles Are

If you find yourself single in New York City on a Saturday night, where do you go? The answer for most Facebook users is a nightclub, with 44 percent of single women and 55 percent of single men dancing their way to love regularly.

Interestingly, the rest of the U.S. follows a similar trend – with men and women preferring to visit nightclubs rather than bars. In fact, bar attendance has been steadily declining for the past several years.

According to our Facebook research, 43 percent of single men listed the gym as an interest, while 47 percent were fans of Netflix. Conversely, 31 percent of women liked the gym, while 37 percent were streaming movie buffs.

What does this tell us? Well, for one thing, a movie night is probably a better date idea than grabbing free weights (for most people). If you’re looking for long-term love, however, the gym may be a good place to start. 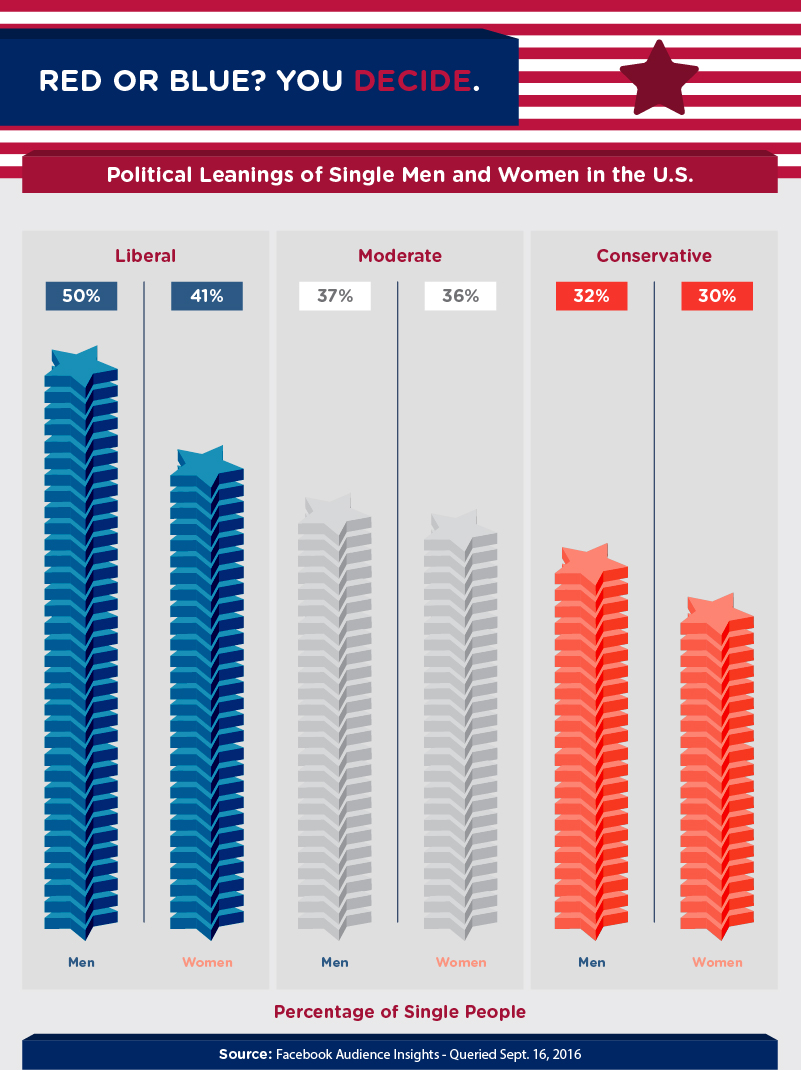 Politics is a touchy subject regardless of your relationship status, but our investigation suggests that underlying philosophies can reveal a lot about how we approach our romantic pursuits. For example, liberals in New York City are far more likely to list themselves as “single” on Facebook. Conservatives have a reputation for favoring a traditional approach to love, and our data indicates this stereotype may hold weight. Only 32 percent of men and 30 percent of women list themselves as “single” on Facebook in the United States.

Either way, if you’re looking for love on the streets of New York, you’re less likely to meet conservatives than liberals or moderates. If you’re conservative and want a partner who has the same beliefs as you, you might want to consider moving out of the city. 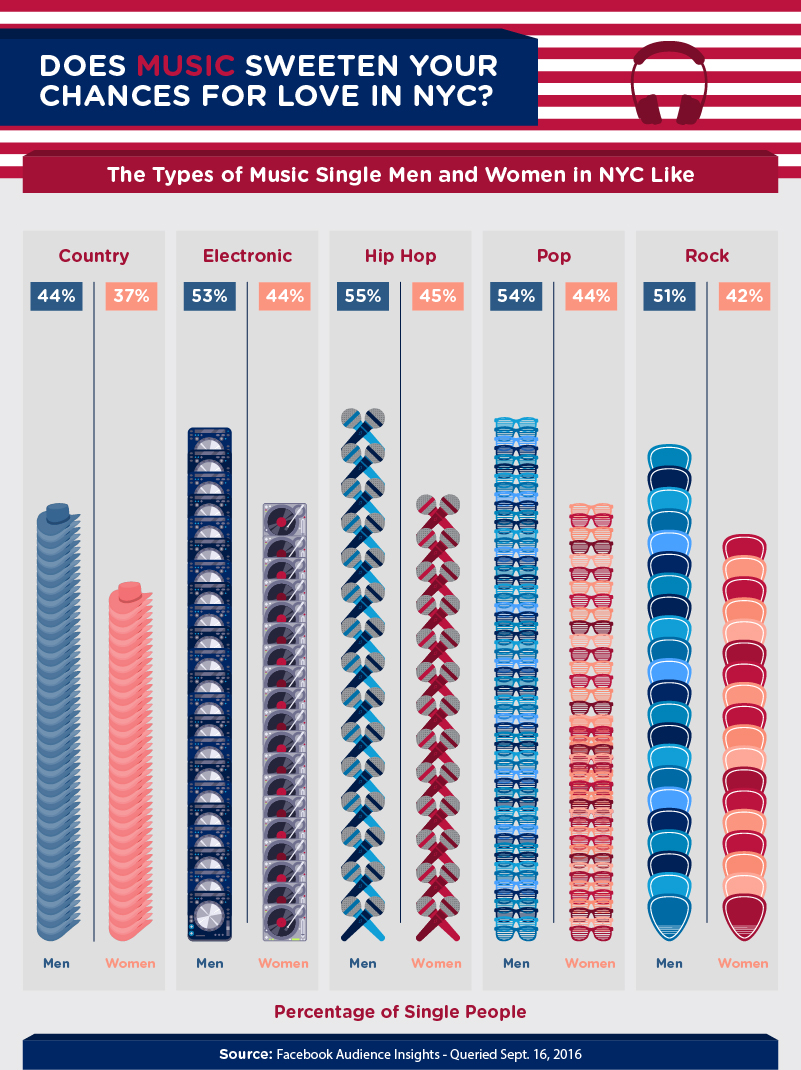 If your goal is to go where the single ladies are, hip-hop music venues are your best bet. According to the Facebook data, 45 percent of women listed an interest in hip-hop music, compared with just 37 percent who liked country and 42 percent who were into rock.

As for the ladies, men had much higher percentages of interest in every music category – 55 percent of single male Facebook users liked hip-hop, 44 percent were into country, and 51 percent were fans of rock.

Looking for Love? Increase Your Odds

There may be more women than men in Hotlanta and more men than women in “Menver” – but finding the right match is still complicated even when the odds are in your favor.

A better way to meet your big love? Connect with them over shared passions and real-world experiences – which is what Sapio is all about. Forget about the bars and nightclubs, music venues and boroughs – our app makes it incredibly easy to discover the person you’ve been dreaming about for so long. Download the app today!

We used Facebook Insights to pull data about the entire Facebook audience. We wanted to look at more than just surface information, so we used a series of different filters when looking through the data. We used interests on Facebook to decide what people liked and didn’t like. This gave us an in-depth view of what singles were doing, what they liked, and where they frequented.

Feel free to share our content with all your single readers for noncommercial purposes only. All we ask is that credit is given where credit is due – to our authors, of course!