Is it something soulful from Beyoncé, a power ballad by Adele, an upbeat ’80s dance number, or perhaps a melody with a twang?

Whatever the genre, artist, or song you have in mind, chances are – it has at least a few mentions of love or sex.

Don’t believe us? In 2009, 92 percent of the 174 songs that made it onto the Billboard’s Top 10 were about love or sex. And based on our own research, that trend is alive and well today. Sex and love sell, especially when it comes to music.

Which music genres mention sex the most, and who’s most likely to sing about love? We scanned thousands of song lyrics on SongMeanings.com to find out.

Genres With the Sexiest Lyrics 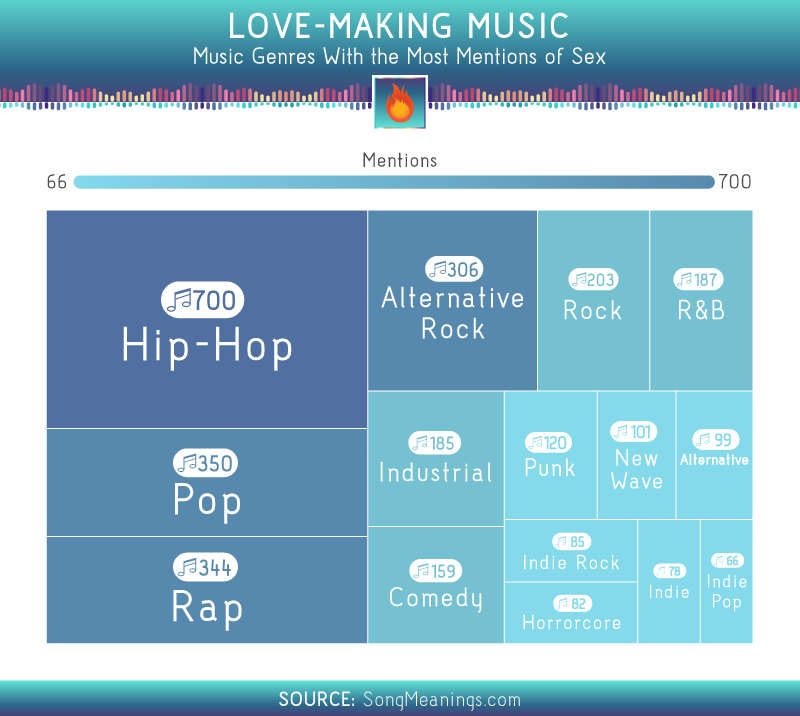 When it comes to talking about sex in music, hip-hop artists have the market cornered. In fact, the genre yielded about twice as many sexy lyrics (700) as any other, including pop (350) and rap (344).

If you’re looking for something sexy to listen to, think Nicki Minaj and Drake rather than Adele or Paul McCartney.

Love in the Lyrics 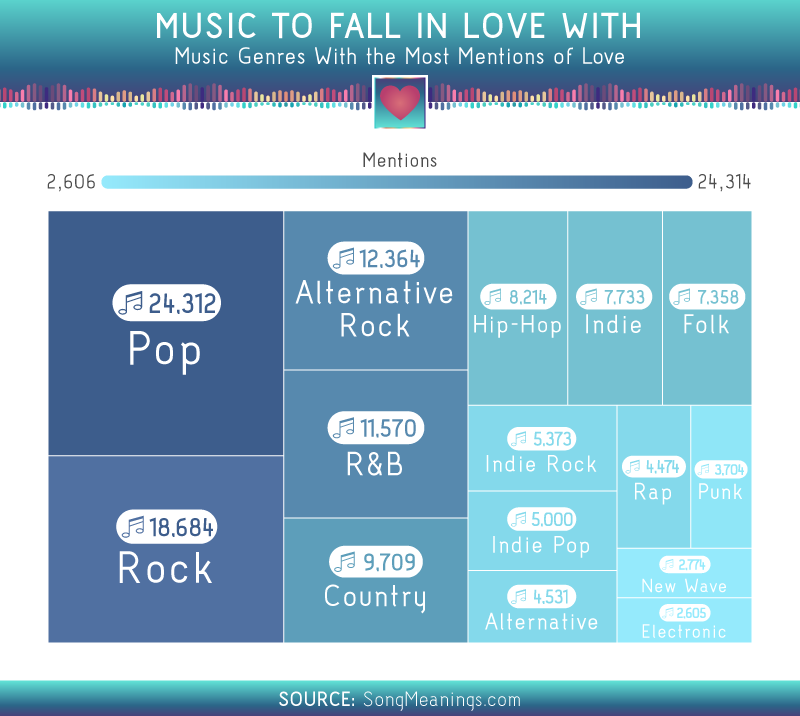 With more than 10,000 love songs making the Billboard list since the 1960s, it’s no surprise that our research has turned up its fair share of love-oriented lyrics. The music genre with the most mentions of romance? Pop! It had over 24,000 lyrics that mention love.

Rock was No. 2 for most mentions of love, while its more aggressive cousin punk had less than 4,000 amorous lyrics.

The Musicians Who Sing About Sex 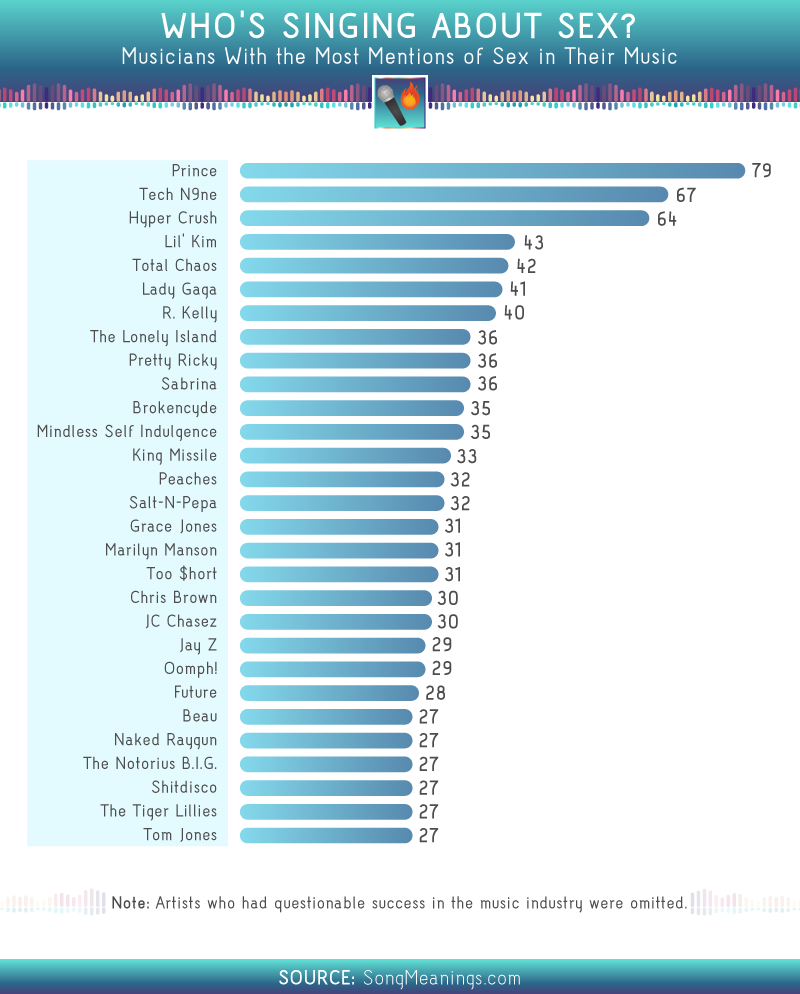 Pop may take the cake for love songs, and hip-hop may mention sex more than any other genre – but what about musicians? Who’s singing most often about getting it on?

The answer – which may be unsurprising for those familiar with his reputation as a sex god – is our dearly departed Prince. He had 79 mentions of sex in his music.

With 32 mentions of sex, Salt-N-Pepa emphasized the need to talk about sexual history with potential partners and even released a remix of their breakthrough single titled “Let’s Talk About AIDS”. Peaches had the same amount of mentions but her message advocates for pleasurable sex.

At the bottom of this sexy song list are artists like Shitdisco, The Notorious B.I.G., Naked Raygun, The Tiger Lillies, Tom Jones and Beau, which all had 27 mentions of sex in their music. 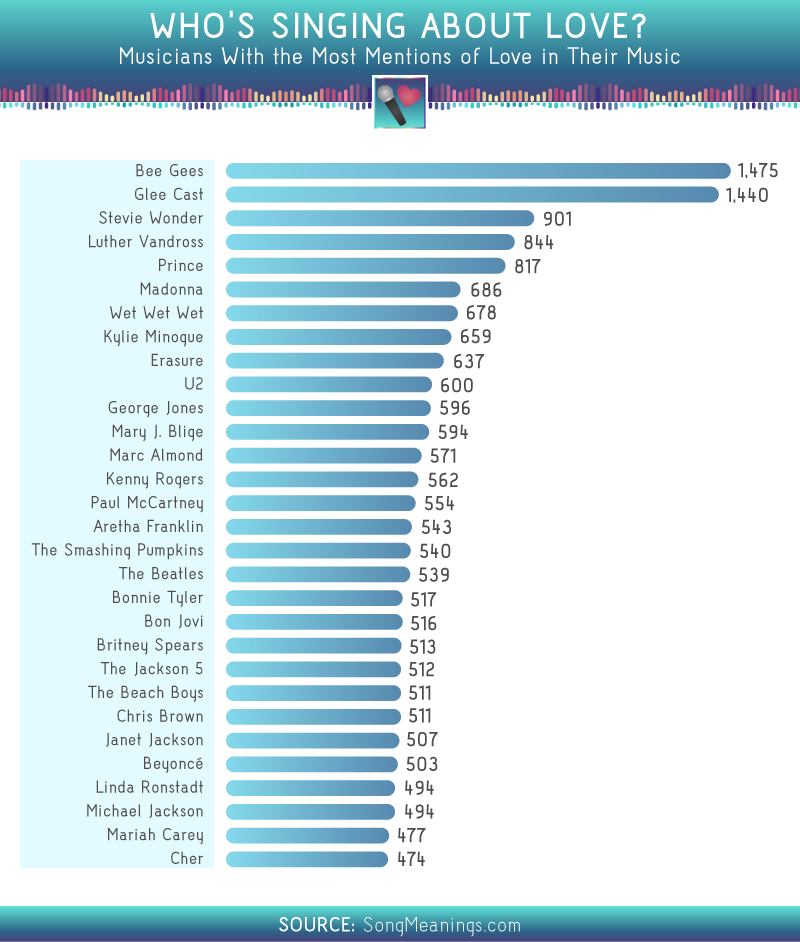 Of all the artists whose songs we scanned, the Bee Gees and Glee cast (sometimes reprising Bee Gees songs themselves) had the most mentions of love in their music – over a third more love mentions than Stevie Wonder (901 mentions).

Based on our data there are 90 songs titled “I Love You” (more if you count all the bad ballads we tried to write in our youth).

There are also plenty of songs titled “Love,” “You,” and “Forever.” When it comes to love songs, artists have covered almost every angle – more than once. As Selena Gomez voices in her song “Love You Like a Love Song,” “Every beautiful thought’s been already sung.”

Love and Sex in Music

When it comes to music, sex sells – but love sells even better. Or at least that’s what the charts seem to indicate (search the lyrics for this year’s top three songs and you’ll find the word “love” in two of them).

What’s your favorite song? Is it a sexy hip-hop tune, a lovely love ballad, or a twangy lyric about loving and losing? Whatever it is, if you’re looking for someone who shares your musical (or other) tastes, Sapio has you covered. Download the app today.

For this project, we tapped into the data at SongMeanings.com to determine which artists and genres have the most mentions of “love” and “sex” in their music.

Love is in the air, so share our content for noncommercial purposes only. Just commit to giving our lovers (or authors of this page) the credit they deserve.