With its breathtaking skyline, stunning natural parks, and truly memorable entertainment, every day is the perfect day to get married in New York. But which lovebirds are proclaiming their marriage for the city to see? And where are they choosing to say their vows?

To see who’s getting hitched in the Big Apple, we combed through every New York Times wedding announcement from Jan. 4, 2015, to July 3, 2016. It turns out, the lucky brides and grooms may have more in common than you think. Read on to see whose love stories are being written in NYC.

Who Are the Bride and Groom? 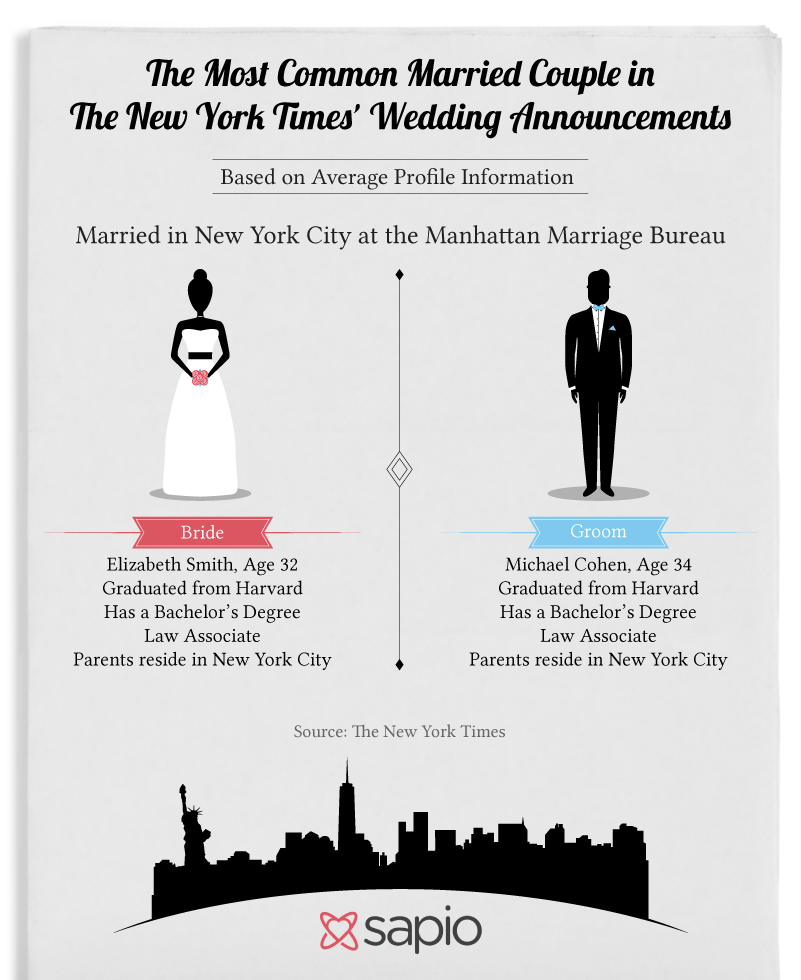 While every New York wedding is unique, a lot of similarities exist between the blushing brides and dashing grooms. Based on what we found in The New York Times’ wedding announcements, the typical bride and groom are both in their 30s, have graduated from Harvard with at least a bachelor’s degree, and are currently associates at a law firm. They also have parents residing in New York City. The most common name for brides is Elizabeth Smith, while the most common name for grooms is Michael Cohen. Perhaps to stay close to home, they decided to marry at the Manhattan Marriage Bureau.

What’s in a Name? 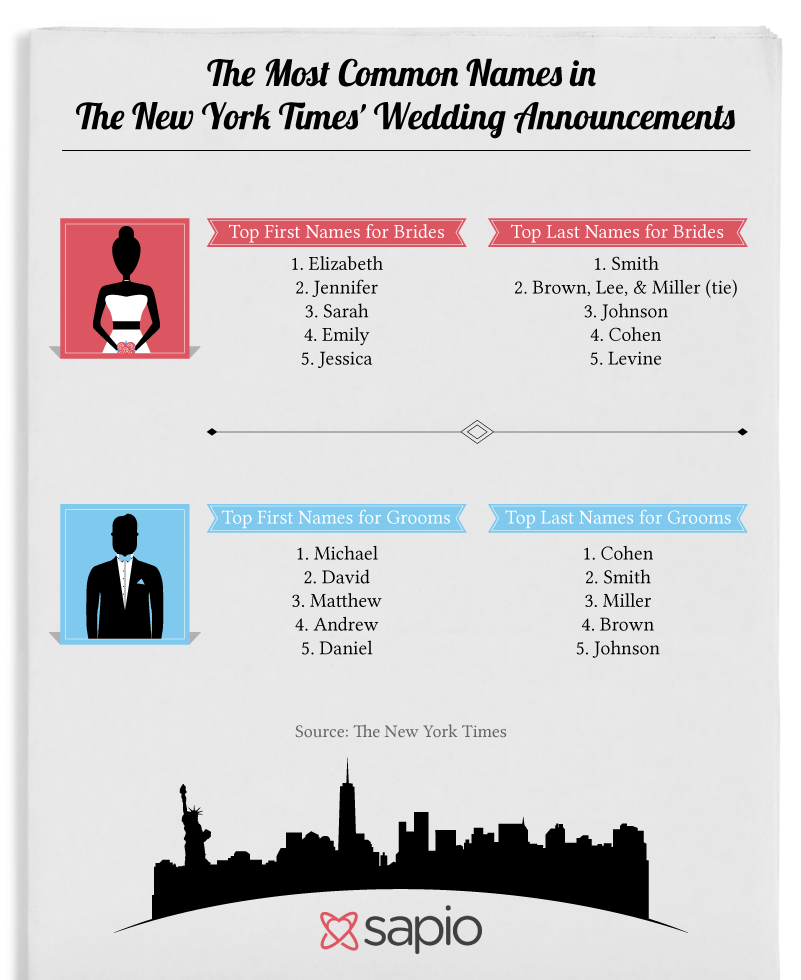 From the looks of it, the names Elizabeth Smith and Michael Cohen may bring some extra luck when it comes to finding your one and only. When we looked at the top first and last names of brides and grooms featured in The New York Times, Elizabeth/Michael and Smith/Cohen appeared the most. Other popular first names include Jennifer, David, Sarah, and Matthew.

Regarding last names, Smith and Johnson were among the most common for both brides and grooms. However, when it came to brides, Brown, Lee, and Miller made slightly more appearances in the paper.

A Degree in Marriage 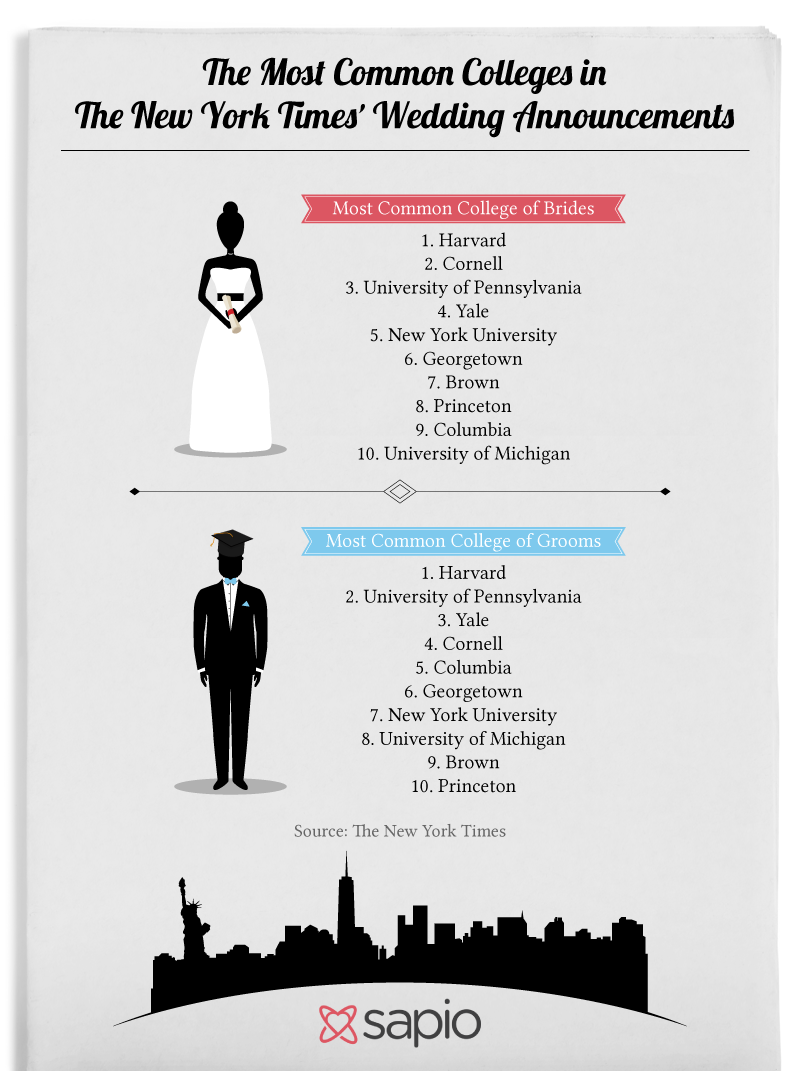 You don’t need a college degree to get married, but it might just help you find a lifelong partner. Looking at the most common colleges that the featured brides and grooms attended, Harvard came in at No. 1 for both parties. Furthermore, while brides were more likely to attend Cornell, more grooms received degrees from the University of Pennsylvania.

Yale came in at No. 4 for the brides, but No. 3 for the grooms, but New York University was a more popular choice for women than for men. The University of Michigan and the University of Pennsylvania were the only public colleges to make the top 10 for both brides and grooms.

Parents of the Beloved

A lot can happen in a New York minute, so when it comes to getting married in the Big Apple, nothing means more than the support of parents – whether or not they live nearby. After combing the wedding announcements in The New York Times, the most common parental residences for both the bride and groom turned out to be New York City. But whereas the brides’ parents were more likely to hail from Washington, D.C., the grooms’ parents came from a much farther distance: Los Angeles, CA.

The parents of both brides and grooms also came from Greenwich, CT. However, the brides’ list included Atlanta, GA, and Boston, MA, in addition to Scarsdale, NY.

What an Age to Be Married 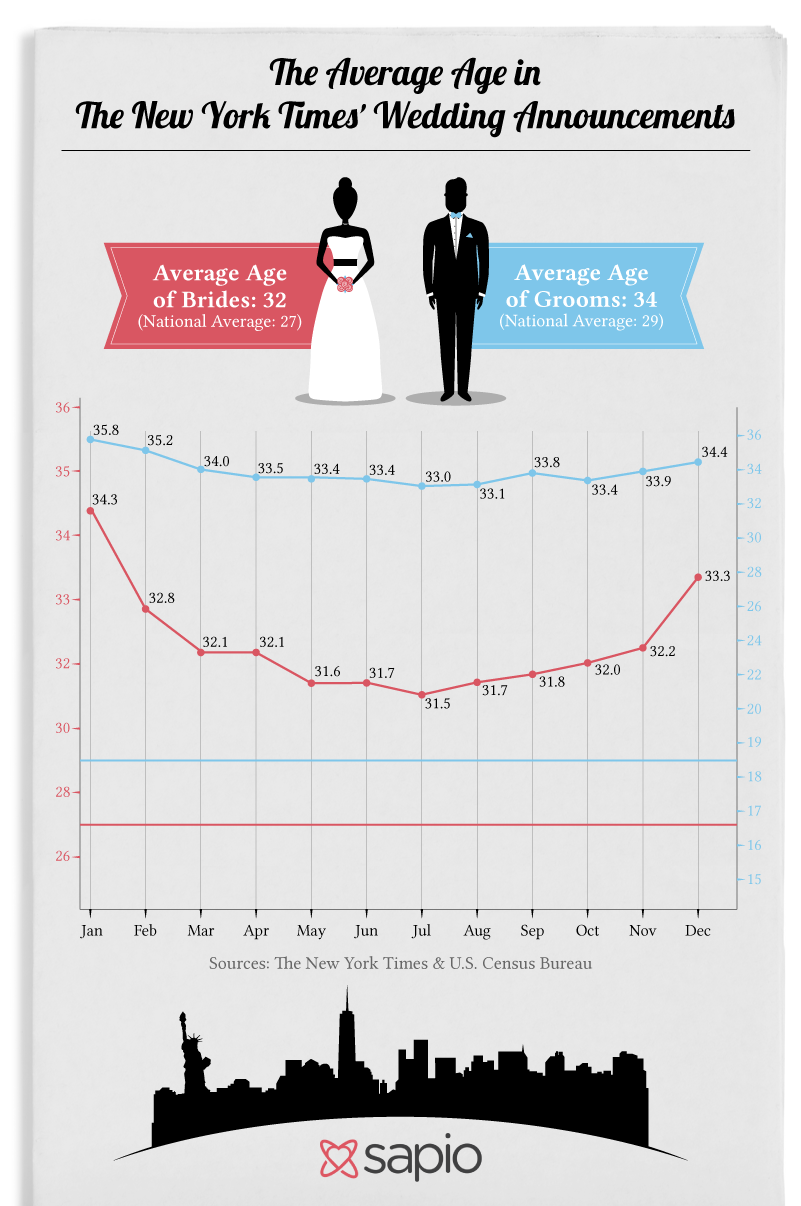 Millennials are getting married later in life than their parents and grandparents – and those featured in The New York Times are no exception. Based on the announcements, the average age of brides was 32, while the average age of grooms was 34. Comparatively, the national average is around 27 for women and 29 for men. The average Manhattan wedding costs is certainly not cheap; could it be that couples are choosing to save up money before having their dream wedding?

Even more interesting: The youngest women in the data set got married in the summer. In January, the average age of brides was 34. In July, the age decreased to approximately 31.5. Nothing like summer lovin’. 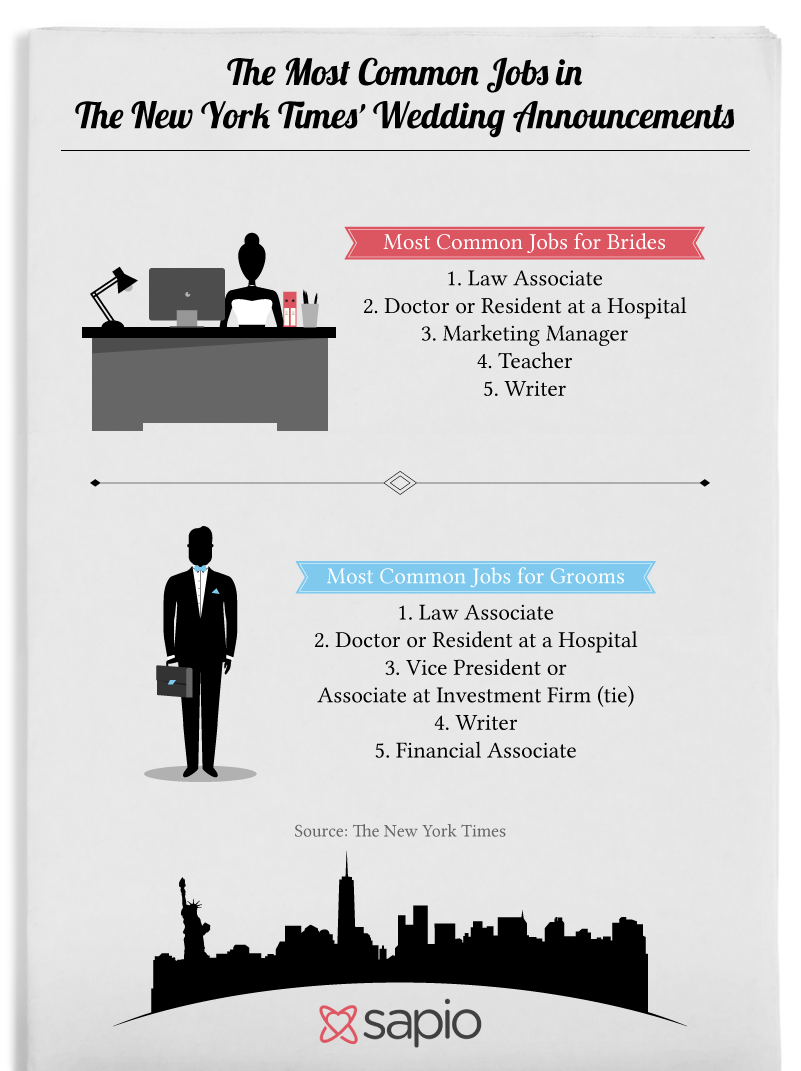 A New York wedding can get pretty pricey. So how do brides and grooms pay for them, and which careers do the brides and grooms proudly bring to the altar? The most common job overall was law associate. However, doctors or residents at a hospital followed closely. Many brides were also marketing managers, while many grooms were vice presidents or associates at an investment firm.

Additionally, being a teacher came in at No. 4 on the brides’ list. The grooms were more inclined to dabble in finances. But both parties included writers (no wonder their announcement came out so well!). 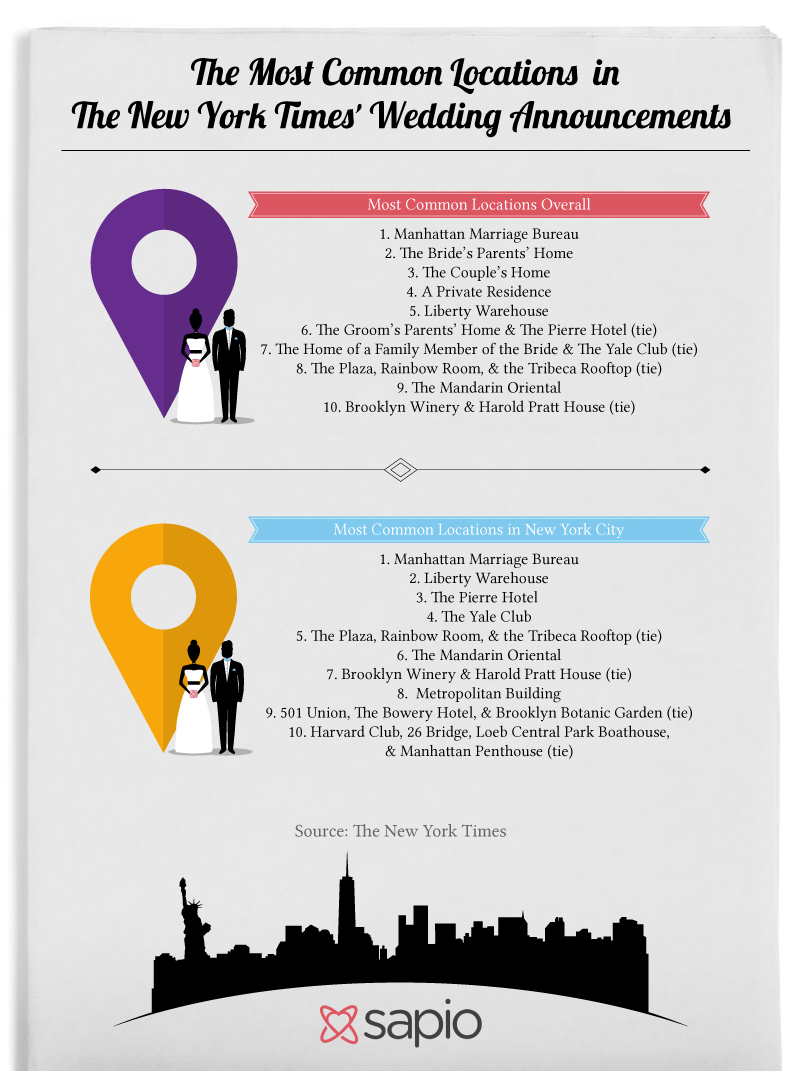 When you’re in love, it doesn’t really matter where you say your vows. And looking at the above graphic shows this to be true. Whether it was the city clerk’s office or Manhattan Penthouse, we found brides and grooms picked places that suited their personalities.

While it may not seem very attractive (romantically), brides and grooms are also choosing to have simpler weddings: at the brides’ parents’ home, their own home, and at a private residence. Still, some forgo the intimate history found in a personal residence and instead opt for the historic charm of The Liberty Warehouse. In New York City, the Pierre Hotel and Yale Club are also some of the most popular wedding venues.

The New York Times wedding section is considered one of the most elite wedding sections in America – so being featured can definitely feel like the icing on the wedding cake.

While we all can’t get married in New York and be featured in The New York Times, we can find love where we’re at. Are you looking for your Elizabeth Smith or Michael Cohen? If so, download Sapio to experience mobile dating as you’ve never experienced it before.

We analyzed every New York Times wedding announcement from January 4, 2015, to July 3, 2016, for commonalities in several different categories.

Want to spread the love? Go ahead and share our graphics. Just take a vow that you’ll link back to this page so that readers can enjoy the romance and find more information if they want.