You’ve had a great first date, and you can’t wait to tell your best friend about it. You’re watching the minutes and hours slowly crawl by, waiting for a decent amount of time to pass before you message your date about how much you enjoyed yourself. You’re already thinking about what can top playing mini golf, flirting over fro-yo, and sneaking into a sold-out show. But when you wait anxiously for those three dots to appear in your messaging app, they never come.

You’ve been ghosted. This isn’t a spooky trick – it’s dating in the digital era. It’s when a person you’ve either connected with and gone on one or more dates with completely disappears. Even Patrick Swayze’s deceased character in “Ghost” gave more notice about ending his relationship than some daters do in real life.

Just how common is this phenomenon? Will you be the subject of a ghost encounter soon? Check out our research to see what parts of 21st-century relationships need ghostbusting.

While they may just not be into you, there are several common reasons why ghosting happens. One such reason is that the “match” is haunted in a different way – by the ghosts of the girlfriend’s or boyfriend’s past. Oversharing about past relationships may cause your date to think you’re not ready to move on.

Distance is another factor. Given how easy it is to match online – sometimes as simple as swiping in one direction or another – perhaps going out of your way to connect in person isn’t worth it if the bond isn’t strong.

Differences in political and religious preferences, which are usually two strongly held personal beliefs, have also been the cause of people showing off their ability to perform a great escape. 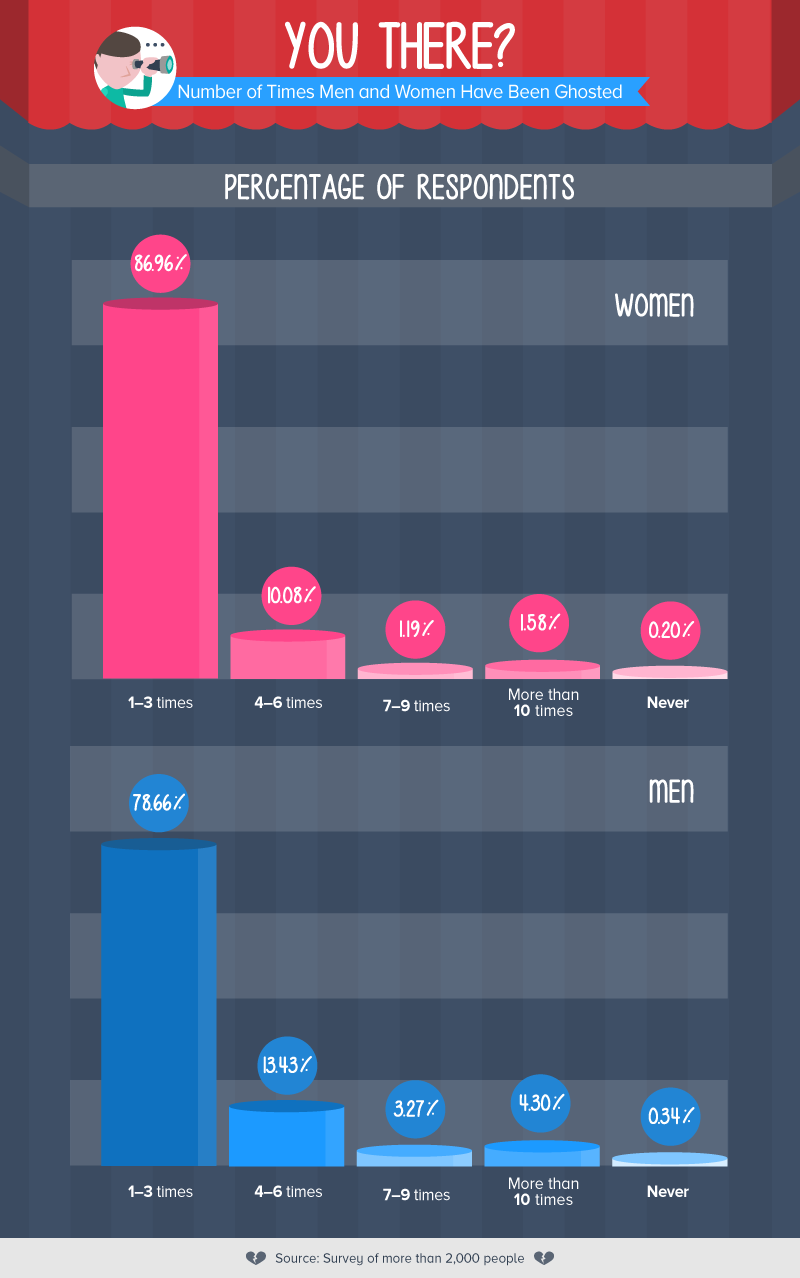 Almost 87 percent of women and 79 percent of men have had between one and three potential prospects vanish on them. That’s too large of an impacted population to be explained away by lost phones or wrong numbers – these are people who never received closure for why someone just stopped responding to their messages.

Ain’t Afraid of no Ghosts? 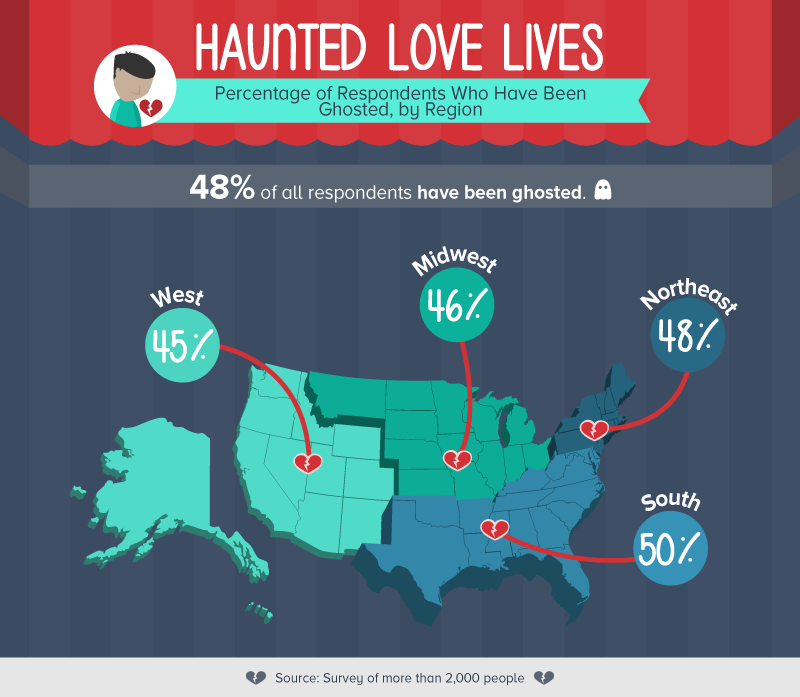 Fifteen percent of Americans 18 years old and older have used a dating website or app, with nearly 30 percent of all Americans between the ages of 18 and 24 having dabbled in digital dating. While not everyone will date someone they meet online, almost 30 percent of know someone who has met their long-term partner or significant other through online dating. But while several are meeting Mr. or Ms. Right, there are those who match with Casper and Slimer.

Almost 50 percent of participants surveyed have been ghosted at least once. So where is ghosting least likely to occur? In the Midwest – where only 45 percent of respondents reported having a close encounter with a dating poltergeist. It’s the Southeast where the most hearts are haunted by what could have been.

Sometimes you just don’t click with the people you match up with. And rejection is awkward. So maybe you “forget” to respond to their texts, emails, or phone calls. Before you know it, the clock expires on a timely farewell. Congratulations, you’ve just ghosted someone.

Over 54 percent of our survey respondents reported phenomenal disappearing abilities. With almost identical results, the Southeast and Midwest have more ghost stories than campfires it seems. Around 56 percent of individuals in these areas made note that they’ve gone ghost at least once. It’s the Northeast – the land of Salem and witchcraft – where you may be least likely to be ghosted; however, 52 percent of participants in this region admitted to dropping their connections. 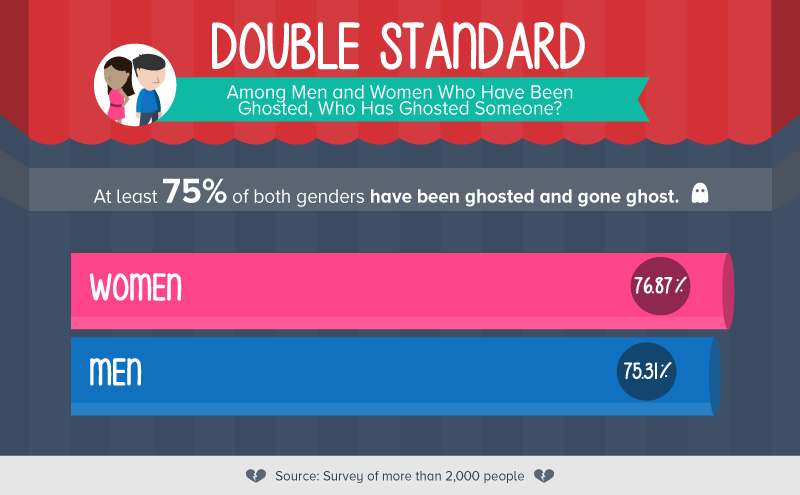 At least 75 percent of those who have been ghosted have gone ghost on someone else. It’s highly likely that you’ve been hurt by someone disappearing just as much as you’ve hurt someone by pulling off a Houdini. Because of the way online dating is structured, it can take the humanity out of the process – which may be why it’s so easy to go ghost on a conversation.

For those on online dating, 65 percent have gone out on a date with someone they met using a site or app. So, is there is a need for dating apps to educate romantics on a no-ghosting policy? Yes, it might hurt to hear the reason why you won’t have a lifelong connection with your date, but isn’t that better than wondering for all eternity: “What did I do wrong?”

Shadow in the (Date) Night

Ghosting is a real problem of modern dating. You’ve likely seen both sides of it, so ask yourself: Isn’t there a better way? With Sapio, you could get to know someone on an intellectual level, meaning your chances of finding the right match far outweigh a gruesome ghosting. Our easy-to-use app lets you zero in on hot-blooded humans who are less likely to spook; our Question Explorer is the ultimate ghostbuster. Download Sapio today on the App Store and Google Play Store.

We surveyed more than 2,000 people in the U.S. and asked them about their experiences with ghosting. We conducted two separate surveys to gather all the information.

Help your readers avoid being ghosted by sharing our content for noncommercial purposes only. All we ask is that our creators are given proper credit.